Title IX and Trump/DeVos – What will happen under the new President and Secretary of Education?

In the wake of the Dear Colleague Letter issued by the Department of Justice and Department of Education on February 22, the future of Title IX and how it will be implemented has come into question, with many critics of the new President and Secretary of Education concerned that recent changes will halt progress and damage the civil rights of students in our schools and colleges.

Introduced in 1972, Title IX is part of the Education Amendments legislation that was introduced to govern gender discrimination and sexual misconduct in American educational institutions who receive federal funding.

The Obama administration focused heavily on Title IX with former Vice President, Joe Biden, at the helm of a team tasked with producing a guidance document as to how Title IX should be interpreted and implemented in American schools and colleges. The guidance document came with the clear conditions that schools and colleges who did not abide by the steps laid out in investigating cases and providing protection to students would not receive further federal funding.

A “Dear Colleague Letter” distributed in 2011 instructed on procedures to respond to accusations of sexual violence, assault, and misconduct within schools and colleges. “Dear Colleague” letters are nothing new when it comes to Title IX. In fact, a recent letter to the Chronicle of Higher Education states that the Office for Civil Rights “has issued at least 27 ‘Dear Colleague’ letters, policy interpretations, guidance letters, and clarifications of Title IX, most of them directed to schools or colleges as a whole” (http://www.chronicle.com/blogs/letters/article-on-title-ix-repeated-common-misconceptions/).

It is the letter of February 22, and a series of their statements (also, lack of statements), that has cast doubts over whether the new Secretary for Education, Betsy DeVos, and a Trump presidency will support and uphold the guidance laid down by the previous administration.

Betsy DeVos’ confirmation as the Secretary of Education was met with considerable doubt from the education sector and even within government. The appointment was one of the most politically controversial of the Trump administration to date and divided the senate. Two members of the Republican Party went against the party vote to reject her candidacy and critics have questioned her qualifications for the job. With a vote of 50 senators for and 50 against her appointment, the tie-breaking vote to confirm her was cast by Vice President Mike Pence. 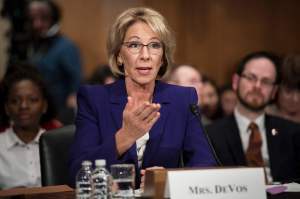 Concerns about DeVos’ qualifications rose when she was first named as a potential candidate for the role. Her suitability for the job, given her lack of experience and her financial affiliations, was called into question. DeVos’ privileged family background also meant that her experience of the education system, and those of her children and family, were all through private education. Her understanding of the public system was queried by those opposed to DeVos’ appointment. These fears were heightened at her confirmation hearing when her knowledge of the education sector appeared alarmingly scant.

A key worry arising from the hearing surrounded her response to Sen. Robert P. Casey Jr’s questions about Title IX. When asked if she would uphold the Title IX guidance that was introduced by the Obama administration, DeVos could not give a definitive answer. She first hinted at potential policy changes but when further pushed on the matter, replied that it was ‘premature’ for her to confirm whether she planned to uphold the guidance.

Within days of becoming Secretary for Education, DeVos’ position on the Title IX guidance became the subject of more debate. On February 22, the Department of Education Press Office issued a new statement rescinding the former guidance document on the grounds that the former document was legally questionable. The document focusses on the “Bathroom Debate”, reversing the right of transgender students to use the bathroom appropriate to their gender identity.

According to The New York Times, three reliable Republican sources reported that the decision to remove the protections afforded to transgender students was ordered by President Trump. The article claims that:

Ms. DeVos initially resisted signing off and told Mr. Trump that she was uncomfortable because of the potential harm that rescinding the protections could cause transgender students. (New York Times, Trump Rescinds Rules on Bathrooms for Transgender Students, Jeremy W. Peters, Jo Becker and Julie Hirschfeld Davis, 22nd February 2017)

The Dear Colleague Letter, issued to all schools and colleges in the US who receive federal funding, has been presented as the New Title IX Guidance. Herein lies one of the fundamental problems with the document. The letter addresses the “Bathroom Debate” and claims that the previous guidance documents do not ‘contain extensive legal analysis or explain how the position is consistent with the express language of Title IX, nor did they undergo any formal public process.’ (Dear Colleague letter, Feb 22, 2017, Department of Justice & Department of Education)

The letter, therefore, pronounces the Obama era guidance documents as irrelevant. The letter does not issue any guidelines as to how schools and colleges should respond to sexual violence, harassment and misconduct, other than to place responsibility for policy making to individual States and school districts.

While Betsy DeVos’ stance on Title IX is still vague at best, her financial contributions and the contributions of her family suggest that there is a conflict of interest when it comes to upholding guidance. Towing the republican line on the matter, the DeVos family have made substantial financial donations to FIRE, the Foundation for Individual Rights in Education. FIRE has been actively opposed to the guidance on Title IX and has contested how Title IX operates under the former guidance document. Promoting an agenda that prioritizes the protection of the accused in cases of sexual violence, assault, and harassment, FIRE argues that the former guidelines, in an attempt to protect victims, violate the rights of the accused.

The document of 22nd February reflects the conservative view that the Obama Administration Guidelines were overreaching and outside of the scope of the Department of Education, returning policy making and decisions about implementation of Title IX to State and local level.

What the future holds for the 300+ cases of sexual abuse, harassment and discrimination currently under investigation according to the old guidance remains to be seen.

Title IX is Not Under Threat

It’s important to note, however, that the concerns relate specifically to guidance documents and how different administrations believe the Title IX legislation should be interpreted and enforced. The law itself is a federal law that is not under any immediate sign of threat. Title IX has been in place for 45 years and has been solidified in the courts over that time. The guidance documents are guidelines only and are not legally binding in a traditional sense (although judges have cited them in opinions).  Secretary DeVos and President Trump may issue further guidance related to Title IX. These guidance documents and any procedures they may introduce or eradicate may be reviewed and altered again by subsequent administrations.

Education leaders and lawyers should pay careful attention to what action, and what inaction, Secretary DeVos and President Trump take on Title IX.  As much as an active role may change the landscape, there would be significant changes to how Title IX works on campuses with a less active Office of Civil Rights at the Department of Education.

Dr. Matthew W. Colpitts is currently the Head of School and President of Ventures Academy, a unique high school for students who want to create startup businesses while in school! He is also currently on the Board of Directors for Studio East, a non-profit for youth theatre and performing arts education. Previously, he served at Léman Manhattan Preparatory School as the Director of Residence Life & Campus Safety where he lead the educational, operational, and student support aspects of the boarding program and security for the whole school. Matt has been an educator, administrator, and leader in higher education and K12 independent schools for over 10 years serving in the areas of residence life, university housing, student conduct, campus safety and security, emergency management, enrollment management, and student affairs. Matt has also served in educator-leader roles at diverse educational institutions including Clark University, Landmark College, Southern Oregon University, Utah State University, and Interlochen Center of the Arts. He also does independent risk and safety management consulting. A first-generation college student from rural Maine, Matt is a proud graduate of Clark University in Worcester, MA with a B.A. in English and Philosophy. He holds an Ed.D. from Fielding Graduate University where he researched emergency management in educational institutions. Outside of school, Matt enjoys reading, traveling, and learning Brazilian Jiu Jitsu. View all posts by mcolpitts

What are your thoughts? Cancel reply

This site uses Akismet to reduce spam. Learn how your comment data is processed.